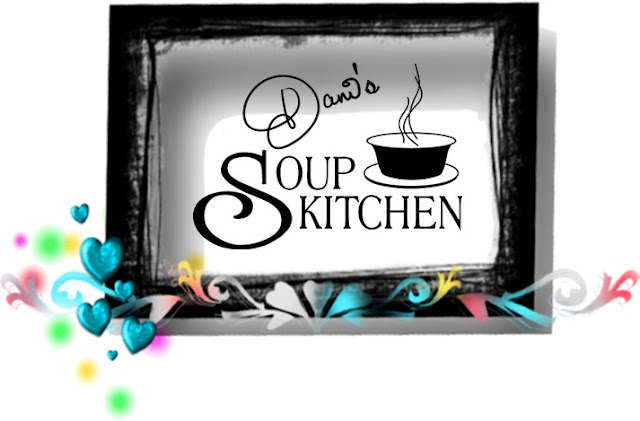 Today we are bringing you a variety of soups, some of which we're sure you've never sampled.  But once again we've provided the links to the recipes so you can give them a try if you're up for it.

Warning:  This is a long post, so don't go postal on me!  Relax and read it at your leisure. 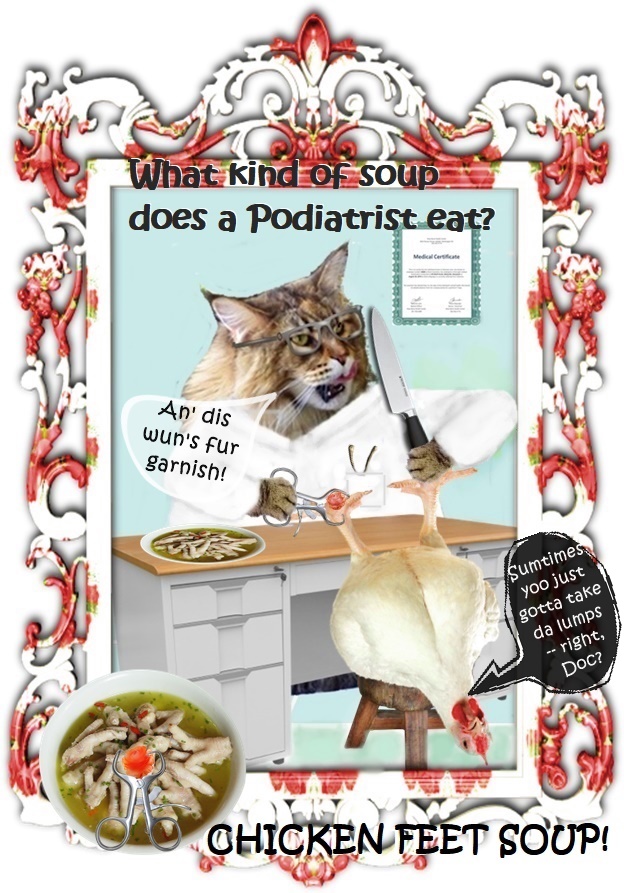 Anyone making an appointment with Dr. Dani should furst make a wish.  She keeps a wishbone at the ready just for such circumstances.  And don't be wishy-washy about it or you may end up in the soup!

In my opinion they should garnish the doctor's wages -- in this case taking the lumps (and eating them) is tantamount to malpractice.  It may not qualify as Catnibblism, but it's definitely not good practice to consume any of your patients' parts.  Ew!  Shades of Hannibal Lecter.  I wonder what wine he would pair with that. 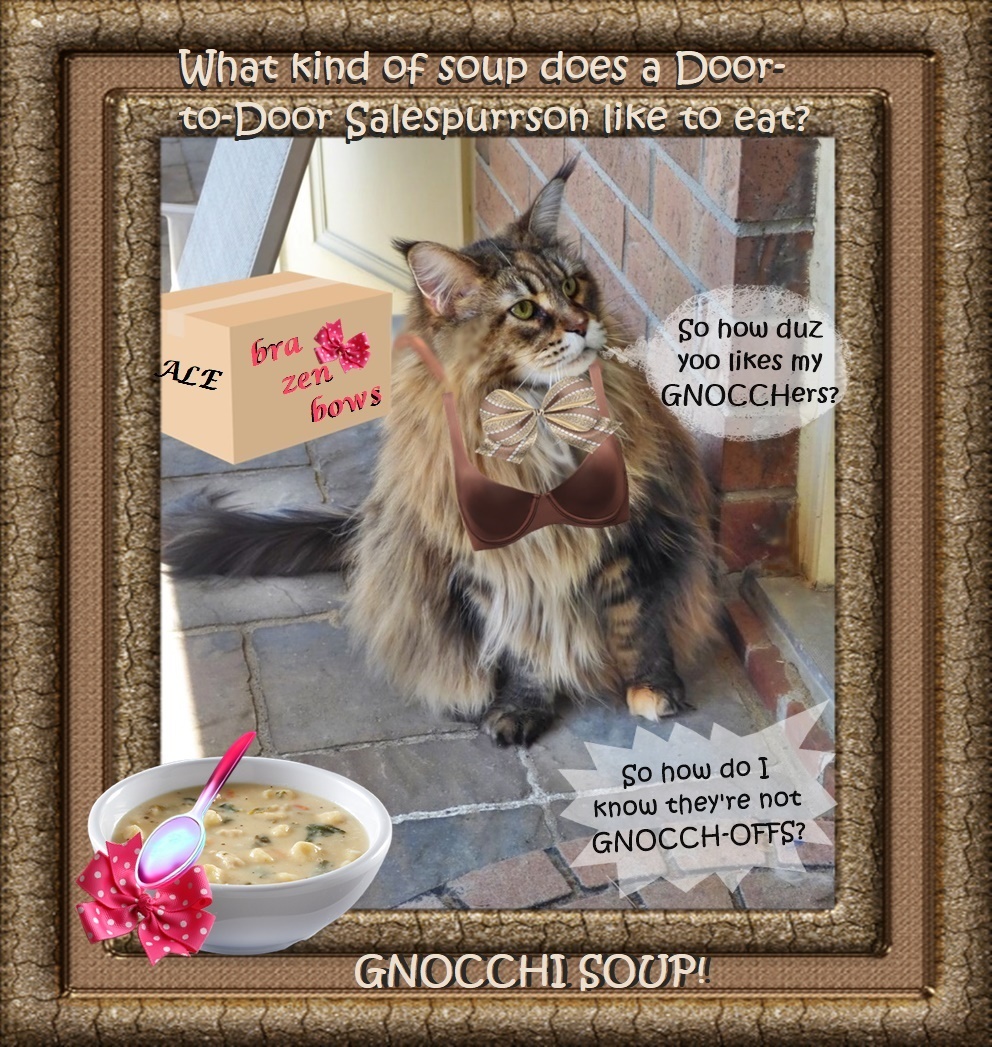 Dani is rather 'brazen' for a door-to-door sales rep.  Usually, you don't wear your product.  Normally images in your CATalogue should suffice.  Notice Dani has utilized her brazenness in naming her business as well i.e., bra zen bows. When pronounced phonetically it actually sounds like 'Bras and Bows'.
Going door to door, a thought occurred to me (Oh no!).  Purrhaps Dani should expand her product line to include Door Knockers which would serve both her needs and those of the client.  A knock on the door is much more difficult to ignore when it has the power and prestige of a well-fashioned door-knocker behind it.  And she could show off her knockers without stripping down to her unnawares.
Unfortunately, my propensity for puns is also likely to set me off in the direction of dredging up Gnocch-Gnocch Jokes.  I hope you can bear with me during this difficult time.
https://www.allrecipes.com/recipe/218794/chicken-and-gnocchi-soup/ 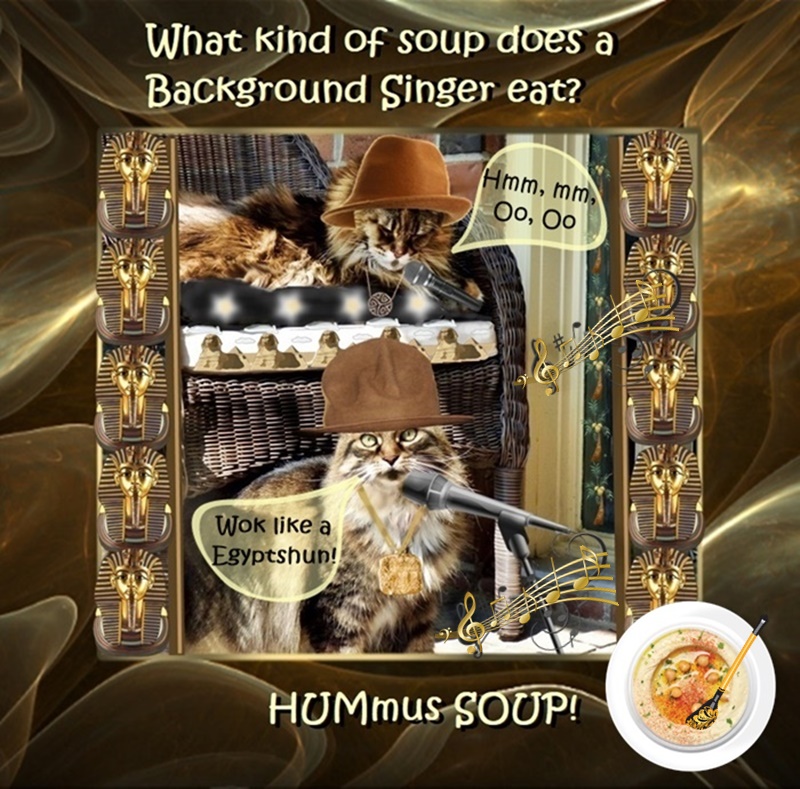 Even though Sox is the lead singer, I always love it when Dani hums us a tune.  Eating hummus over the years has served her well -- in more ways than one.  Her voice changes and becomes more throaty, likely from the hummus coagulating down deep in her 'maw'.  And please note, that is in no way a reference to me.
I do think they need a humdrum to ramp up the beat for their band, though.  Less ho-hum if you know what I mean.  Oh, and they call themselves "The Humbles" though they are anything but.  I think Humpty Dumpty would be a better name, though it's likely to spawn an argument over who's Humpier and who's Dumpier.
Also, since Christmas is coming up sooner than later, they should get a healthy helping of 'Bug-Off' to obliterate those Humbugs.  (Healthy for us, that is -- not so much for the bugs.)
And, of course, here's hoping the New Year will be a Humdinger!
https://www.kopiaste.org/2007/11/houmous-soup-chick-peas-soup/ 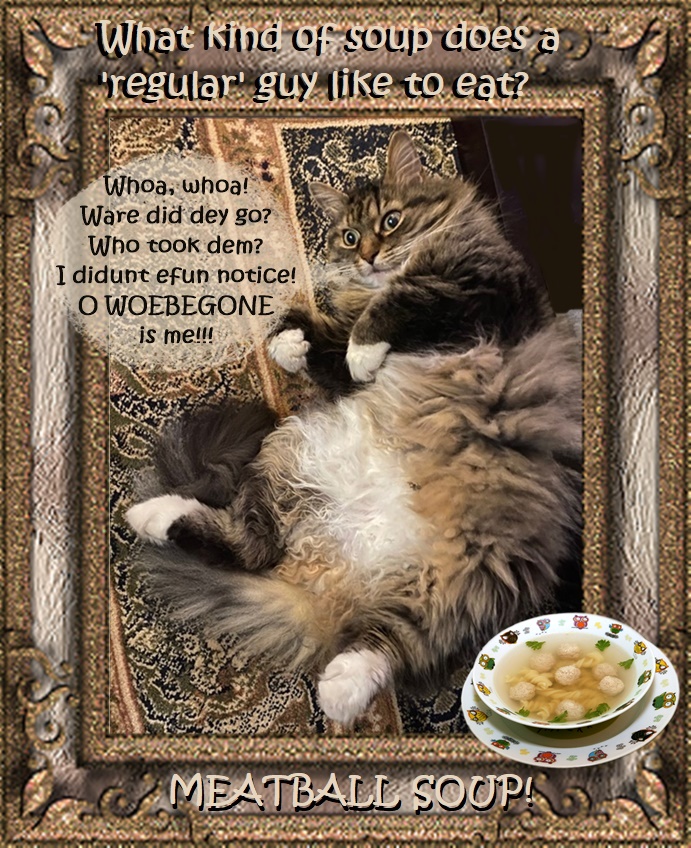 Finally, in an effort to bring you a Soup to Nuts encore, I engaged Mr. Sox in the role of a 'regular' guy. It only became clear once we were underway, that he was not a good candidate when it comes to the main requirement.  Rather he turned out to be highly irregular, though it was not something that even he was aware of.  His fluff disguised his lack of stuff, if you get my drift.
Upon discovering he was bereft of nutmeats, Sox was quite distraught.  Whoa, whoa! 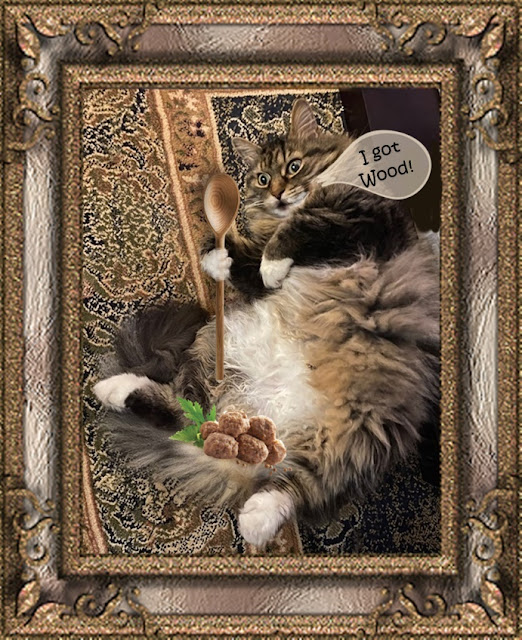 Nut to worry, though.  We bought him a wooden spoon (to eat his soup with) and an endless supply of meatballs.
I don't know if you'd call him a regular guy, but he sure is ballsy!
https://natashaskitchen.com/moms-meatball-soup-recipe/