DANI: ON BEING GUESTED AND GHOSTED

Dani's been wanting to find another kitty friend because she's real tired of Dada and I during this pandemic.
So today Dani has invited June from Ann's Zoolatry blog to be her guest star.  June is still a toddler, but Dani thinks she can help her along by teaching her efurrything she knows (O Noes!). 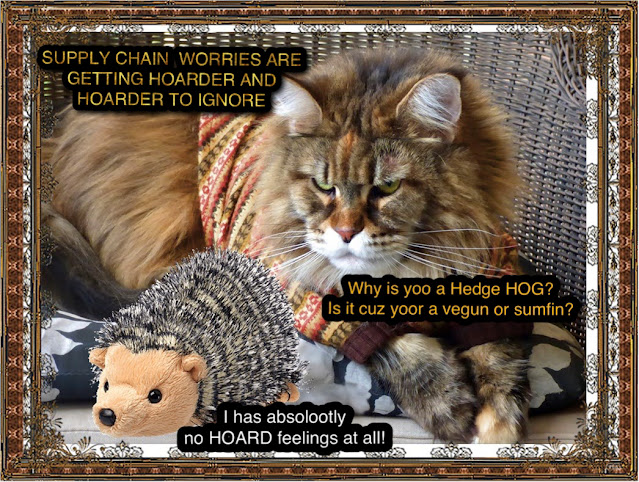 Apparently these little guys will eat just about anything that will go down their tiny throats.  So don't worry about hedgehogs competing for your food.  They're happy eating bugs (and the grubbier, the better). 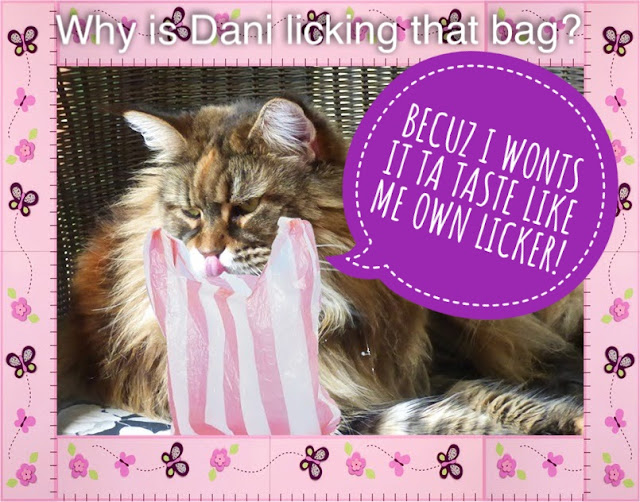 Hi Gene!  Do you think you could come over and give Dani a lesson in COVID PURRotocol?
Pleeeeeeeeeeeeeeeeeeease! 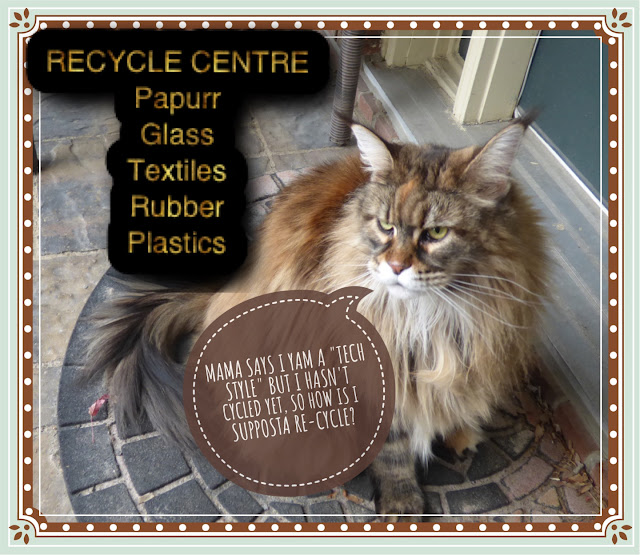 Well, get a different job so you won't be a Tech Style anymore,
and learn to ride a bike, willya? 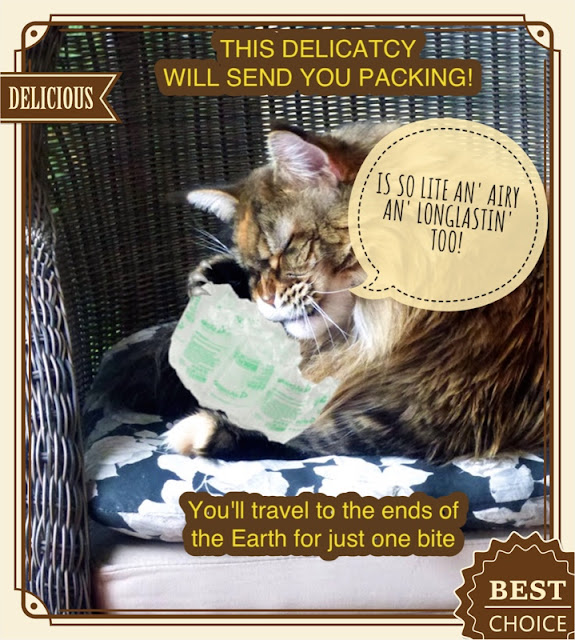 And when you bite into it, it turns into a POP-over!
So now it's time to welcome June to Dani's blog.  June has never been a guest star before, so she's very excited about it. 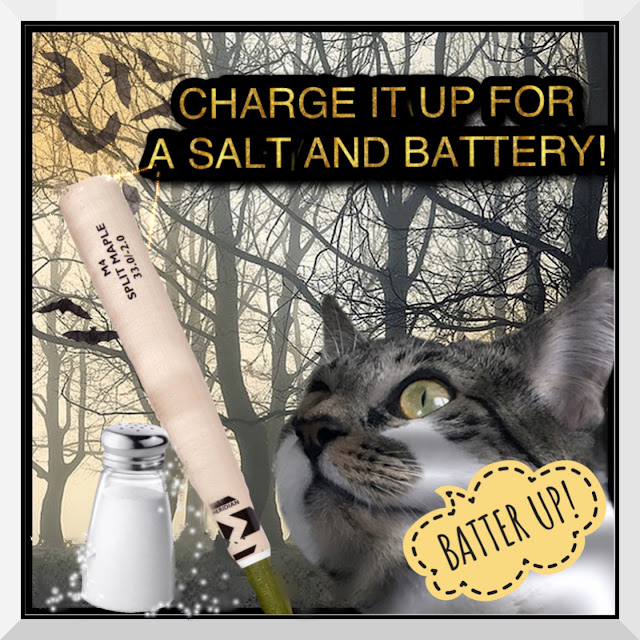 Well, now June has gone all hyPURR on us.  If I didn't know better, I might think she was going to batter up all those bats and deep-fry 'em.  Take my advice, little one, and just bat your big, beautiful eyes at them.  Then you won't have to go to jail. 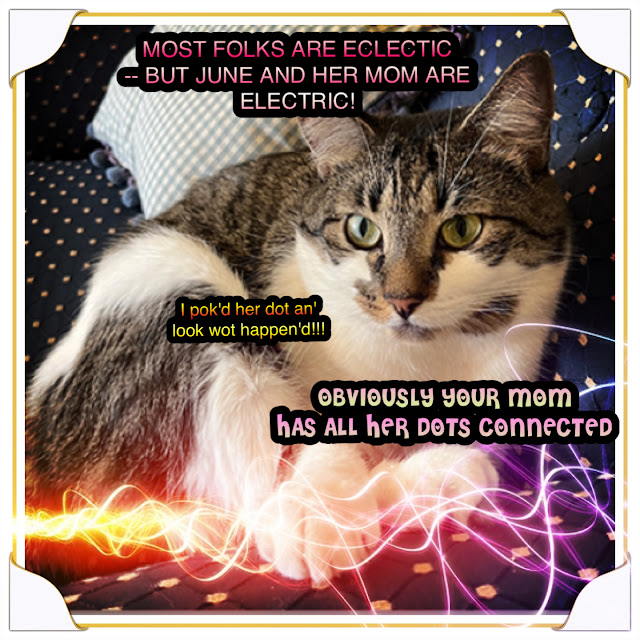 You'd be a natural at poke-her!
So now Dani has the great idea of introducing June to her angel-sisfur Domino who absolutely adores polka-dots.  So much so, that Domino has even taken up Dominoes.  And she wants to teach June how to play. 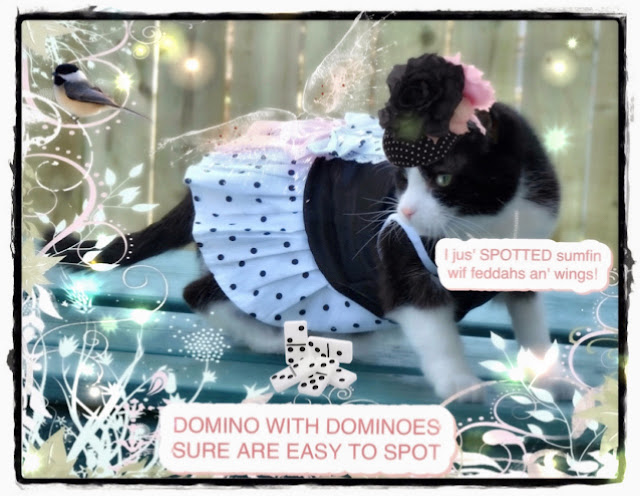 Even with Domino's spotty record, she still earned her angel wings (which also have tiny, almost invisible dots).  However, they don't like you to gamble in PURRadise. That's why she visits Earth so she can still have a good game of Dominoes, and maybe make a little moulah on the side (for charity, of course). 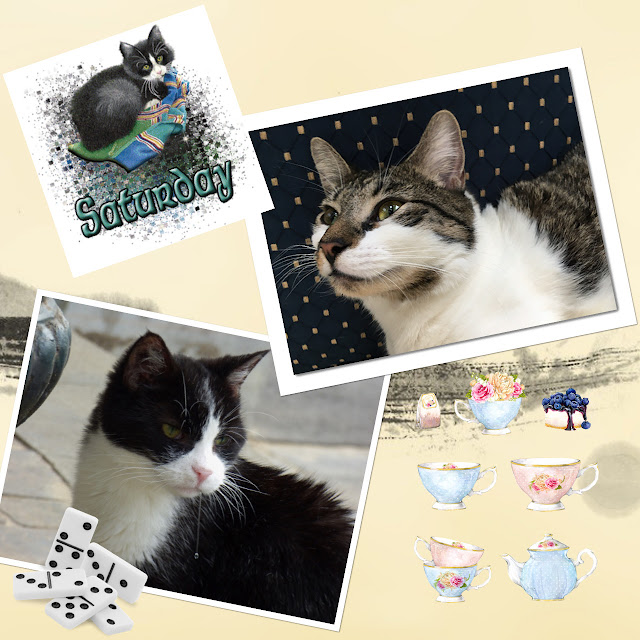 So after meeting June for the furst time, Domino invited her to come over on Saturday for some tea, some dominoes, and of course for Domino herself.  After all junior June looks at Domino as being her mentor, especially when it comes to all things dotty.
"There is no dotted line I woodn't cross for Domino (eggcept fur the Pearly Gates).  I is much too yung for that"  says June after careful consideration. 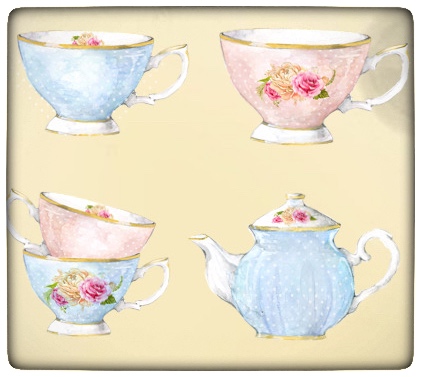 Even the teaset has polka-dots! (Not surprising really.)
Well-spotted, June.
And don't worry about Dani.  She's got more than all the time in the world  -- infinity, in fact -- to catch up with Domino.  So now that Domino's gone back home, Dani can get to know June better.
Besides Dani's not really into playing dominoes, only in CATmunicating with her winged sisfur.  All is well that never ends.
So all I have to say about that is
SPOT ON!
☄️
-
Posted by CCL Wendy at 1:00 AM