Dani has gone far and wide, back and forth in time, to assemble this collection of both current and past cat memes attributed to her Mama.  For today's finale she has even ventured into times yet to be.
Dani starts things off, as usual, and her guest stars include June of Zoolatry, The Cherry City Kitties, Mama's squirrel friend from the old days before that tree was cut down, an unidentified cat chin (too bad we couldn't catch it entirely), and Dolly of Brian's Home in an extraordinary capture.  Whew!
Dani has labelled each picture where it falls on the Timeline, i.e., Past, Present and/or Future.  She hopes each one encapsulates its peculiar place in Time.
PAST 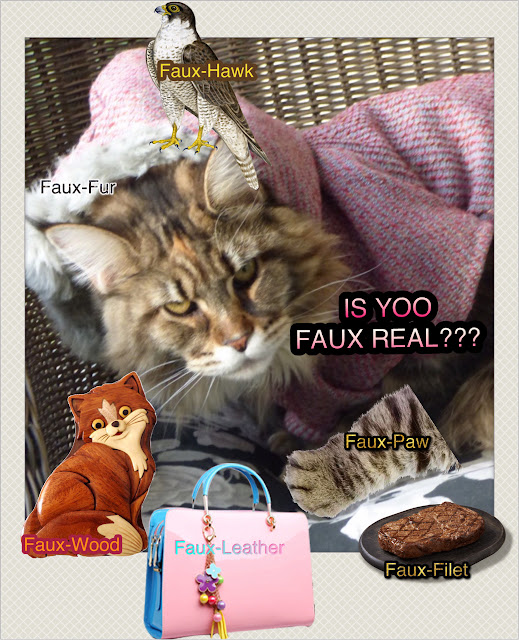 The word 'faux' used in front of any given word makes you question the reality of the falsity.  Witness ...
Faux-Thought means you are wrong.
Faux-Cast means your local weather person was wrong AGAIN.
Faux-Shadow means what you thought was your shadow belongs to someone else.
Faux-Tell means you're a liar.
Faux-Swear means it's something you made up to be rude.
Faux-Ever means it's over.
FAUX-REAL is an oxymoron, so it's totally meaningless. (More on this later.) 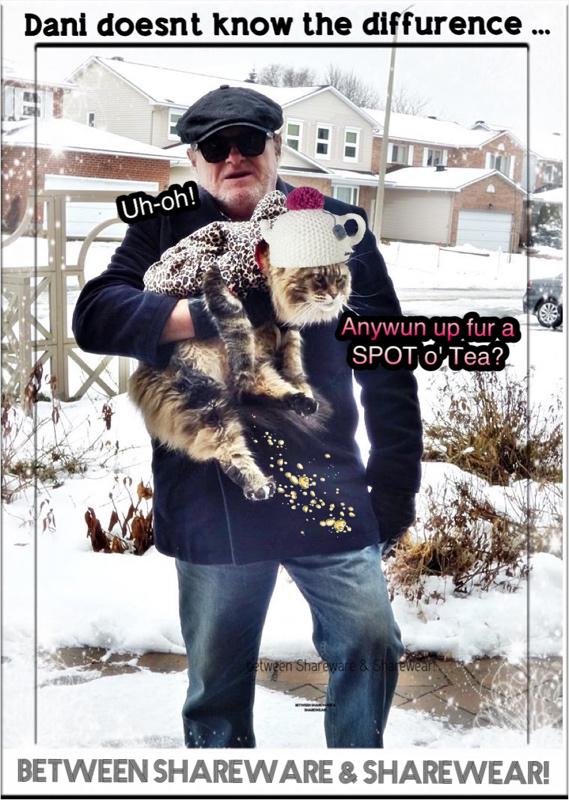 Unfortunately Dani's output seems to be greater than her input (which is rather piddly really), and frankly speaking there's nowhere to put the output except to let it fall on the snow or run down Dada's leg.  In this case, sharing is definitely NOT a good idea.
PRESENT 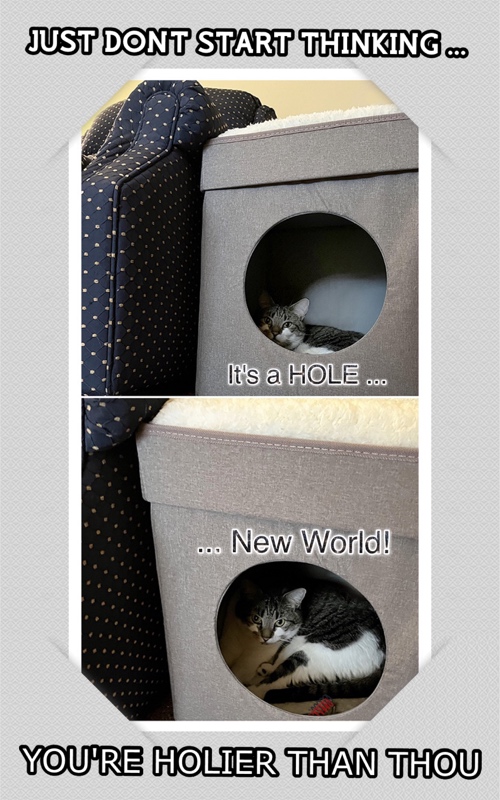 Because in this case you'd actually think you were better than yourself.  It could definitely lead to some psychological trauma.
PAST 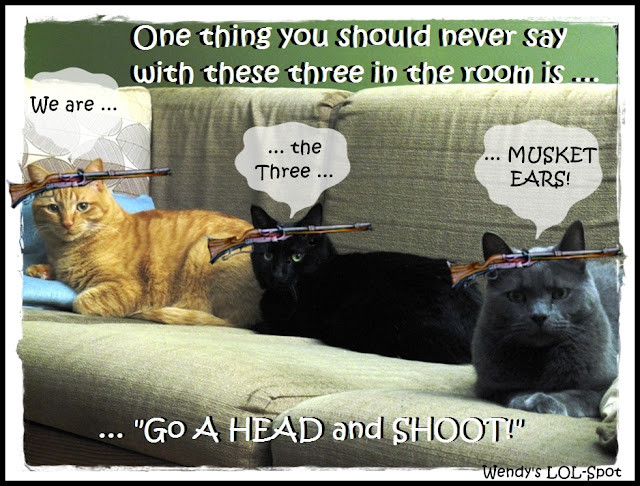 Here are Dexter, Tipp and Harry of the "Cherry City Kitties".
Even if you don't shoot your mouth off, they will!
PAST 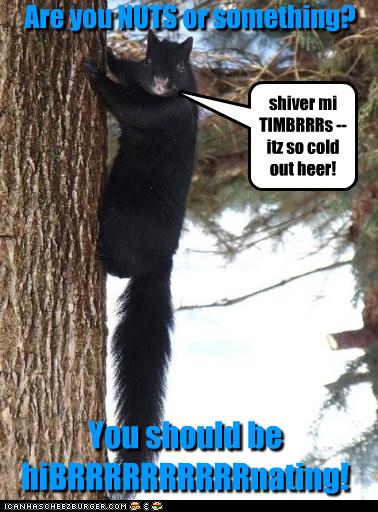 Neither sleet, nor rain, nor snow will keep a squirrel from its appointed rounds.  Freezing temperatures, however, may make it reschedule its appointment.
PAST 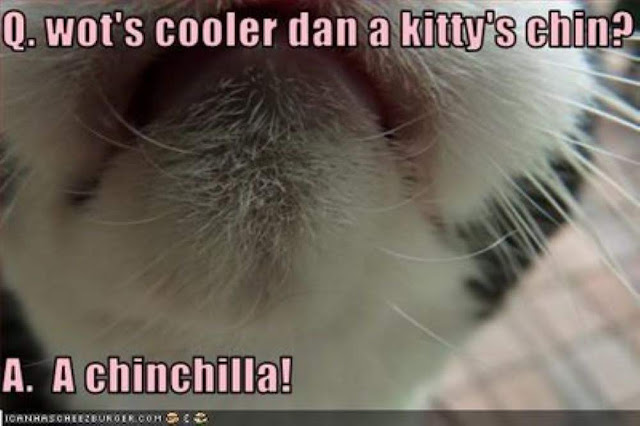 This one goes back so far I don't know who the kitty is.
Chilling your chin keeps more chinny-chin-chins from rearing their ugly jowls.
PRESENT
In other words there's no more "I" in your IQ
(or Q in your Q-tip).
PRESENT & FUTURE 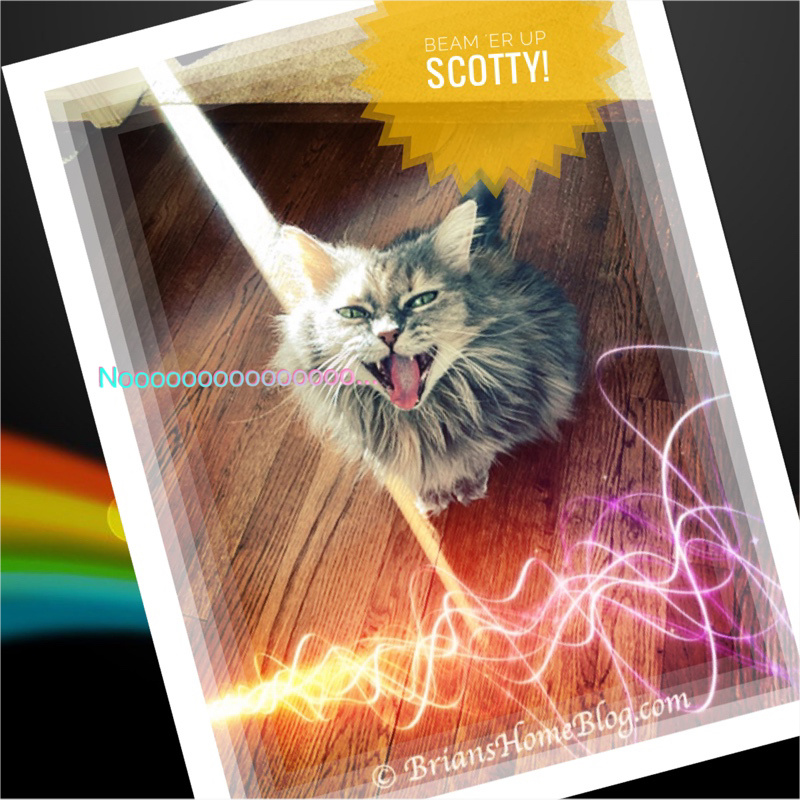 Email ThisBlogThis!Share to TwitterShare to FacebookShare to Pinterest
Location: 9462CMQ9+6X 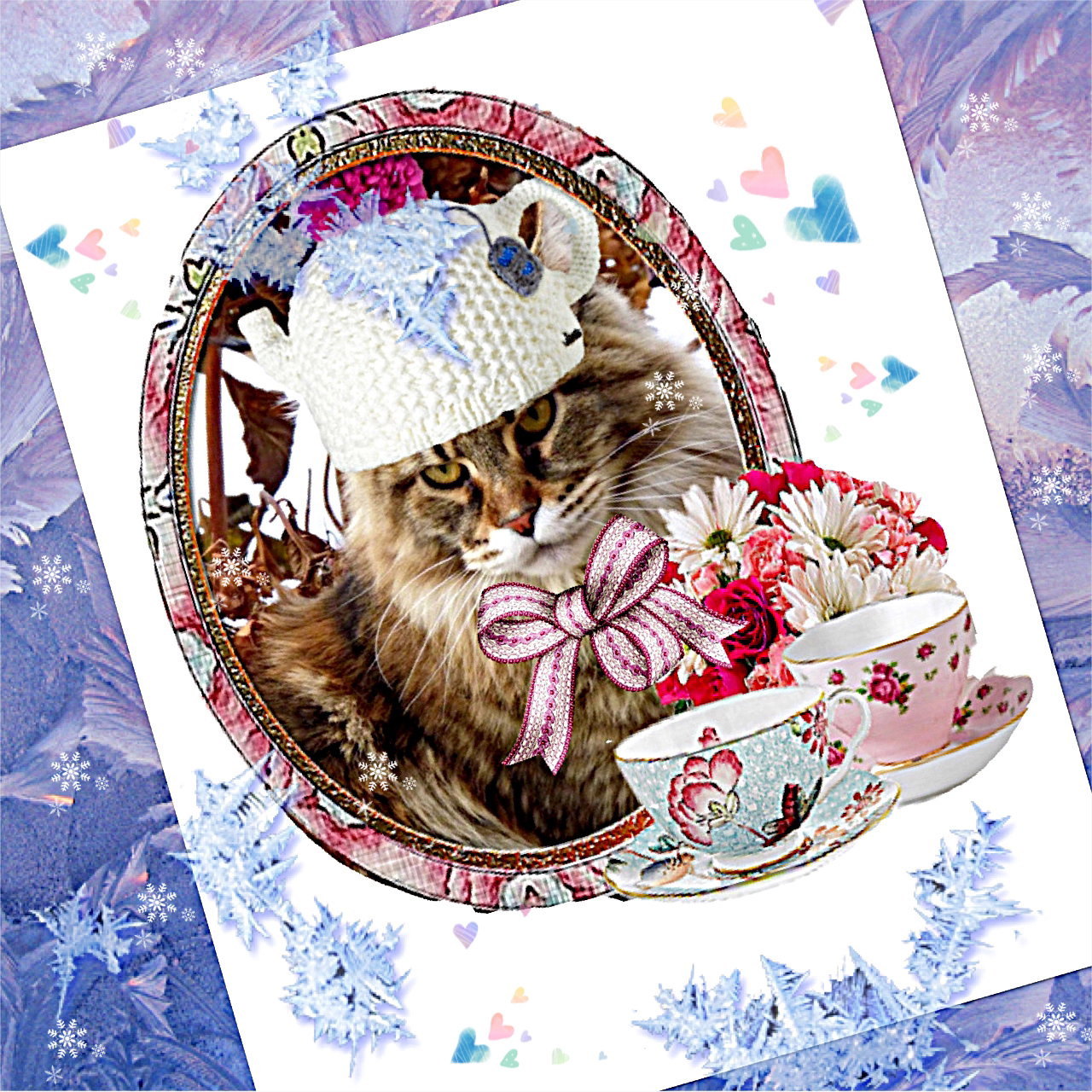 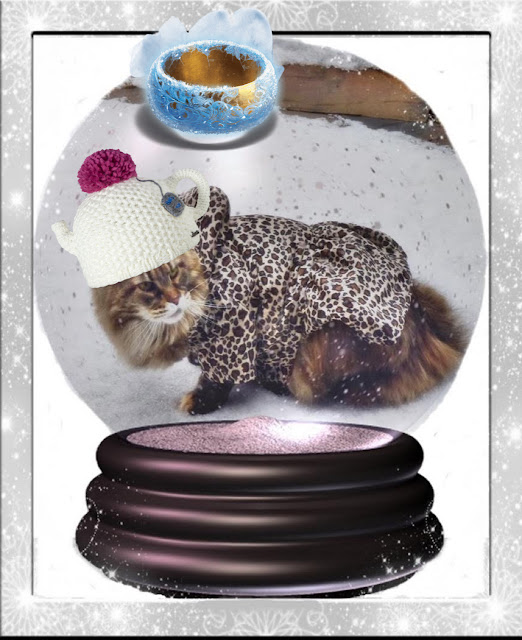 Dani was busy all weekend long assembling this gaggle of goofs.  Some of the usual suspects are here, but there's more than one strange face amongst them.  Baby is the first stranger and he belongs to my friend's daughter. Baby comes up with the most eccentric PAWStures -- he's a natural for this kind of thing.  And then there were three (strangers, that is) -- the aforementioned Baby along with his two co-horts who belong to my friend, herself.  They all look pretty similar, but the two latest additions are formerly feral Freiya in the cat tree, and her brofur Hagrid, relaxing beside Baby in the middle.

June of Zoolatry purrforms her customary guest-starring role, as does my grandkitty Sox, sepurrately.  And this week, Brian of Brian's Home is also joining us with a bit of nostalgia from the Cheezburger days.

I hope you will find this assortment of cat comedians, pleasing.
Heeeeeeeeeeer's Dani ... 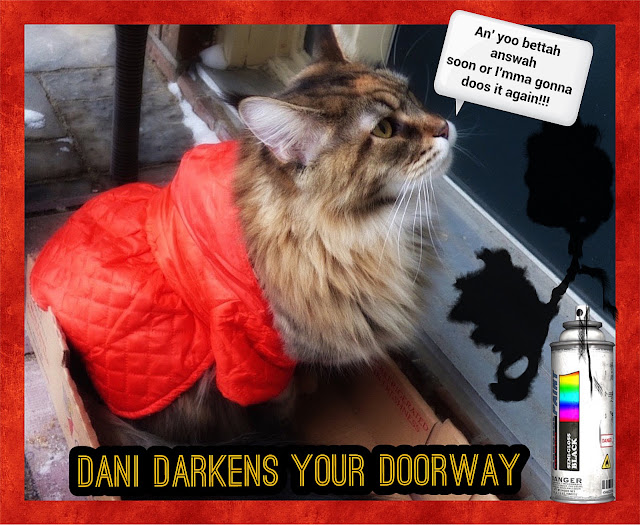 Now that's an ultiMATE HIM if I've ever heard one!  To the commitment-shy, I say 'Do as you're told'. 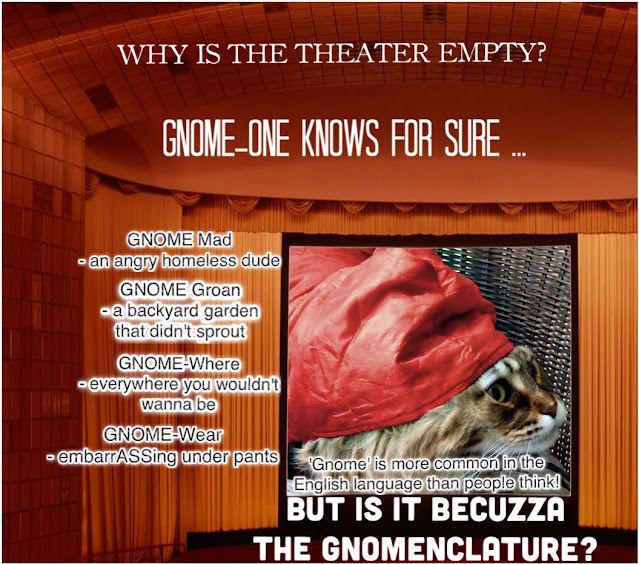 Now let's all sing a chorus of 'GNOME, GNOME on the Range'.
(and I hope you have the range to do it!)

When Baby comes down off his THIGH HIGH, he's gonna need to restore blood flow to that leg.
(Can't get much Stranger than that!) 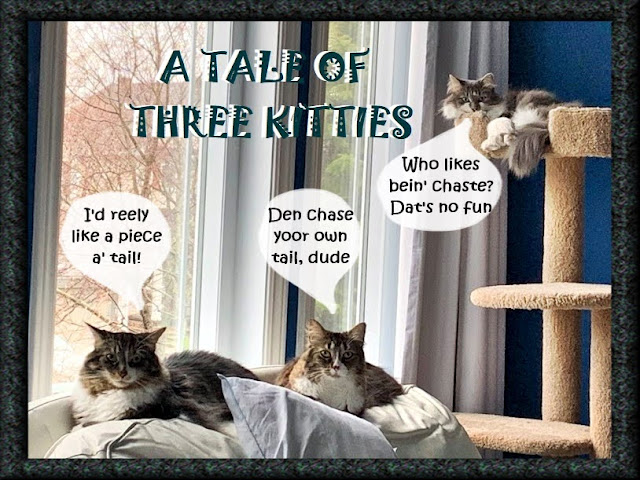 Now there'll be no chasing the chaste.  But if, by some chance you do, go for a little strange instead of your sister.  Pleas! 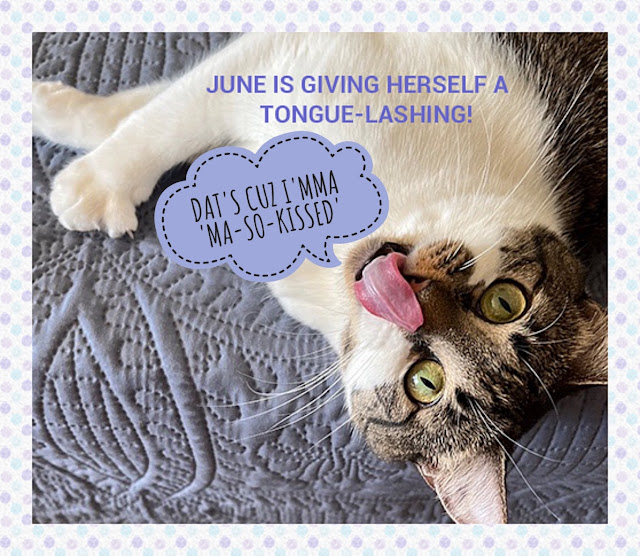 June's MineMom has kissed her SO much with salty lips that she can savour the flavour until the next time Mom sucks her face.  Suckah! 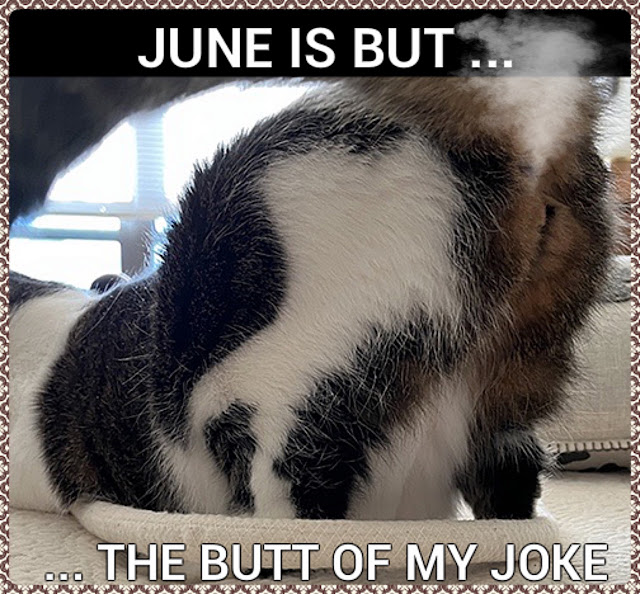 Uh-oh!  June didn't like that very much 'cause she's launched an attack of her own.  We'll just pretend we didn't see it and leave her alone to let off more steam. 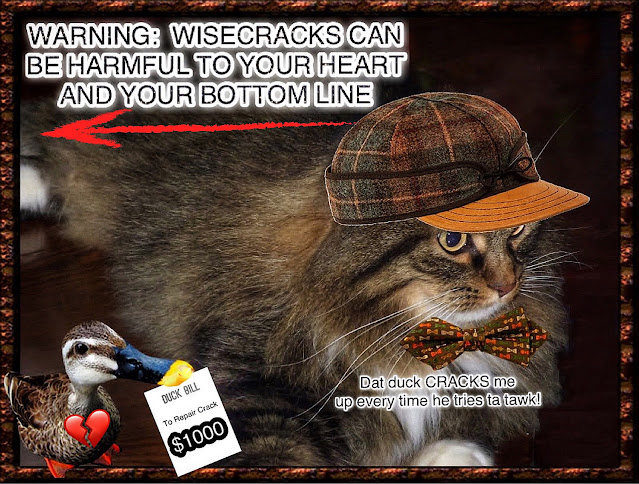 Hopefully, Sox has learned his lesson so it's all 'just ducky' from now on. 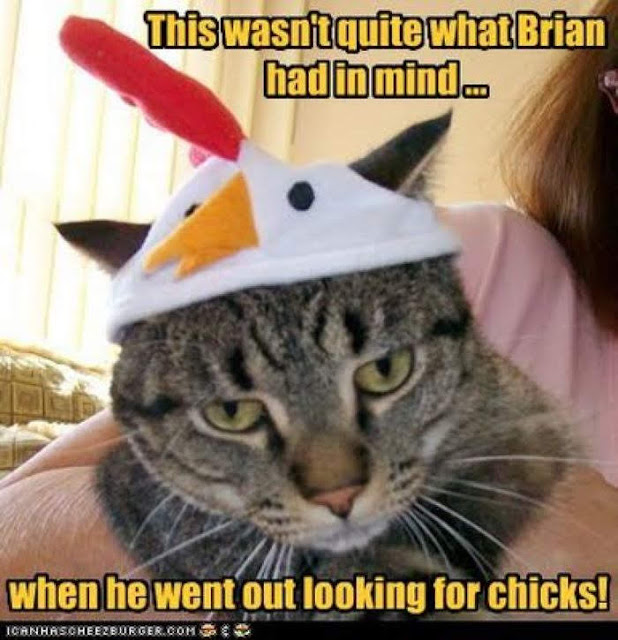 Chicks are just gonna think Brian's one of their own.  They'll do his make-up and lend him some feathers for a boa.
All aboa'd da crazy-train!

DANI: IN AND OUT OF THE HOOD

Dani has found a new PET hate.  Oddly enough it's not hats.  After going on and on about winter wear last week, you'd think that winter hats would be at the top of her "I Hate Hats" list. 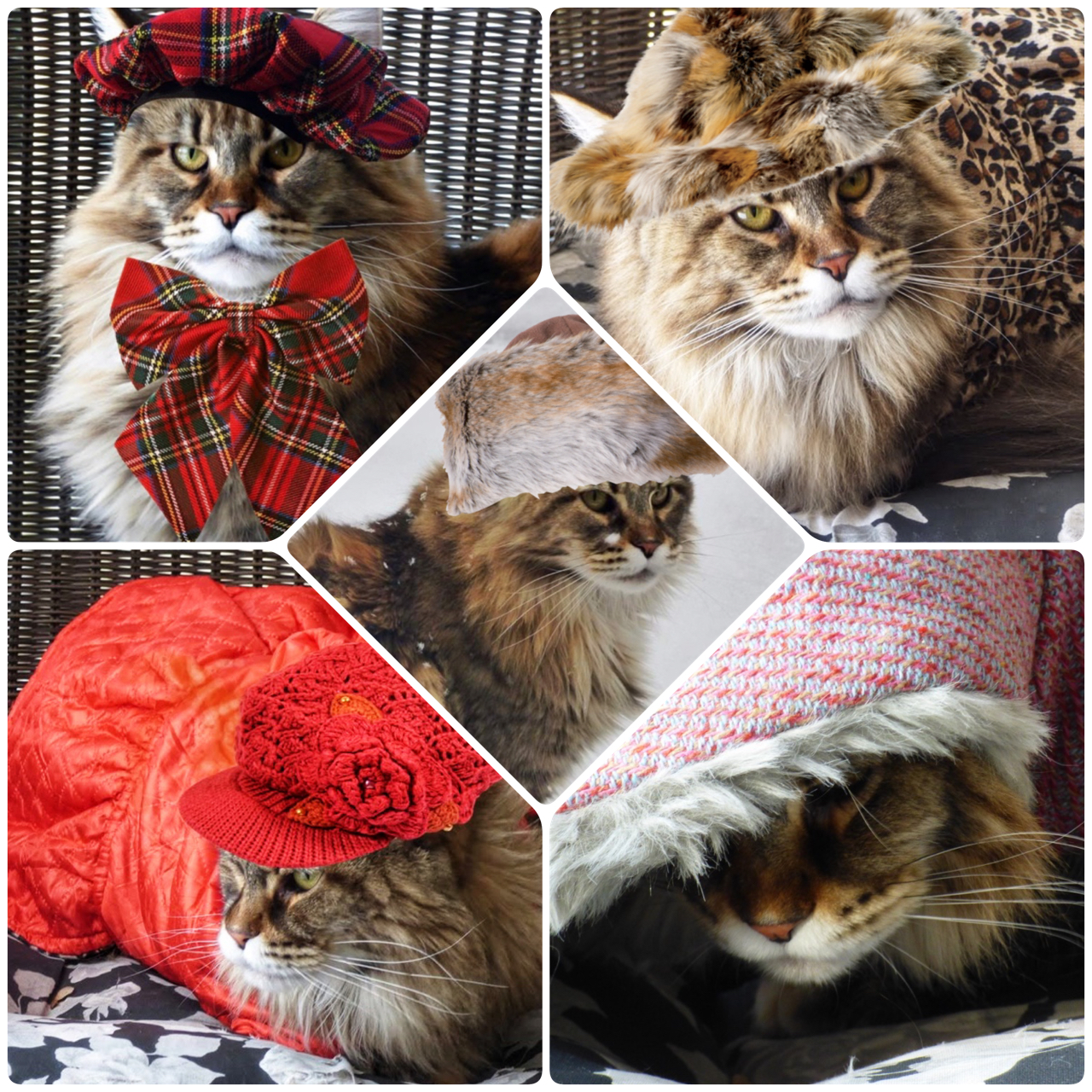 But no, Dani has found something much, much worse -- HOODS!  If you're in your own 'hood wearing a hood, nobody is going to recognize you.  However the real problem comes from not being able to see anyone or anything whilst you're in any given 'hood sporting a hood.
This is nothing 'new since' hoods have been a 'nuisance' ever since they were invented.
As the last picture in the hat collage will show, most hoods aren't fitted, so the edge of the hood falls directly over your eyes thereby impairing your vision.
Hats, on the other hand (er paw) sit nicely atop the head, allowing for a clear line of sight.  They also come in various colours, styles and textures which allows you to change up your look (which is, after all, of utmost importance, especially if your name is Dani).
"Dere is wun hood dat I like", says she.
Really?  Do tell. 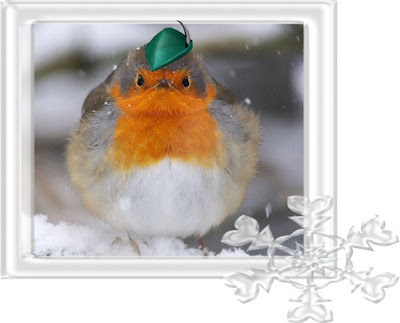 So the moral of the story is:
DON'T LET ANYBUDDY HOODWINK YOU
(no matter how cute they are!)
We are thankful for all the hats in the world that keep our heads warm, and all of the birds who do so much for this planet.

WORDLESS WEDNESDAY WITH DANI: JUST A LITTLE OVER THE TOP! 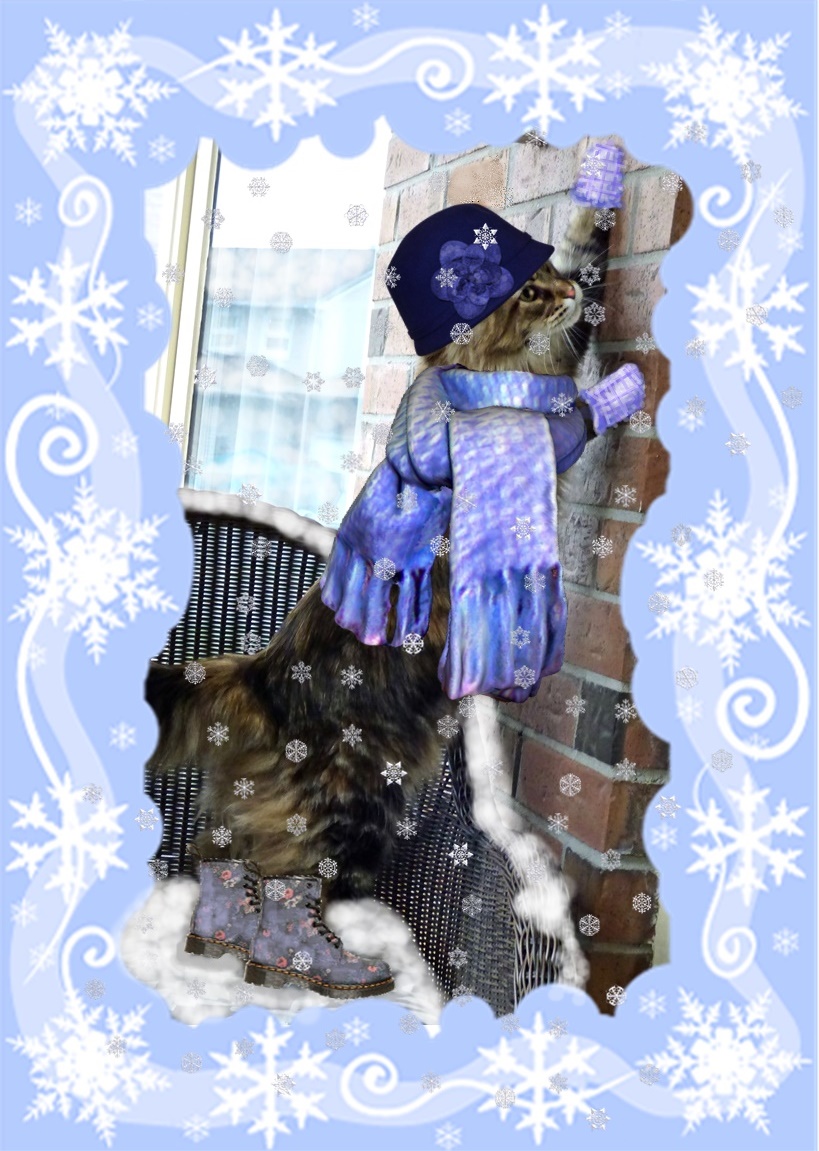 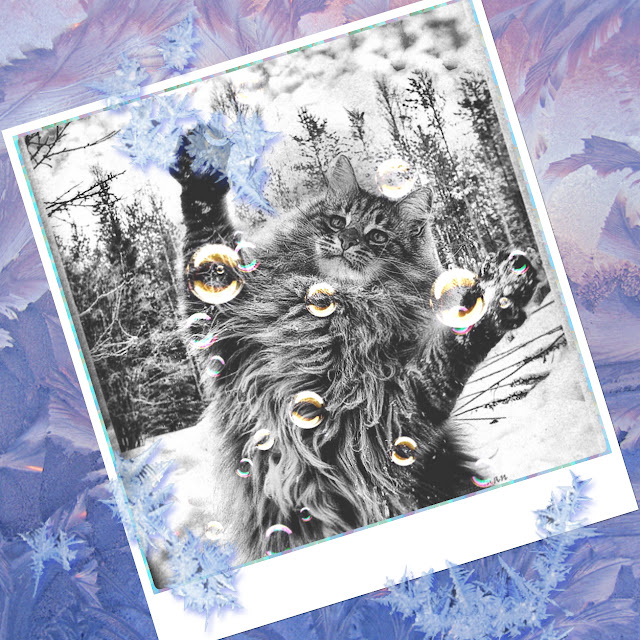 DANI'S THANKFUL FOR HER FRIENDS, ANGELS AND TOILET HUMOUR

THIS POST IS FULL OF IT!
Dani is mostly playing host today which is fair, I guess, since quite a few of her guests are ghosts!  They should be somewhat transparent, but you can really never tell until they show up, and then they could already be there but you wouldn't know it anyway.  Oh well, let's give it a test run and PURRceive what happens.
Aside from Dani we have the lovely June of Zoolatry and her two angel sisters, Zoey and Maggy.
Meat Eeyore is a new friend we found on the internet.  He was game (meat) so we asked him to join us.
Then we have our very own angels, Dante, Dylan and Domino, who just appeared at the very last minute.
And bringing up the rear (literally) is good old Sox.  Thanks for the help, buddy!
So let's get on with the show (or no-show in some cases). 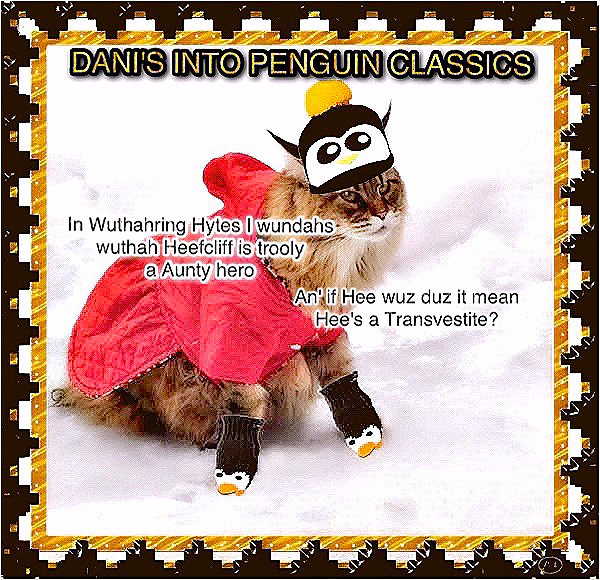 I must say, I never took you for a Bookie!
So how much do you wanna bet that Heathcliff wore dresses?
(My aPAWLogies to Emily Bronte, author of Wuthering Heights) 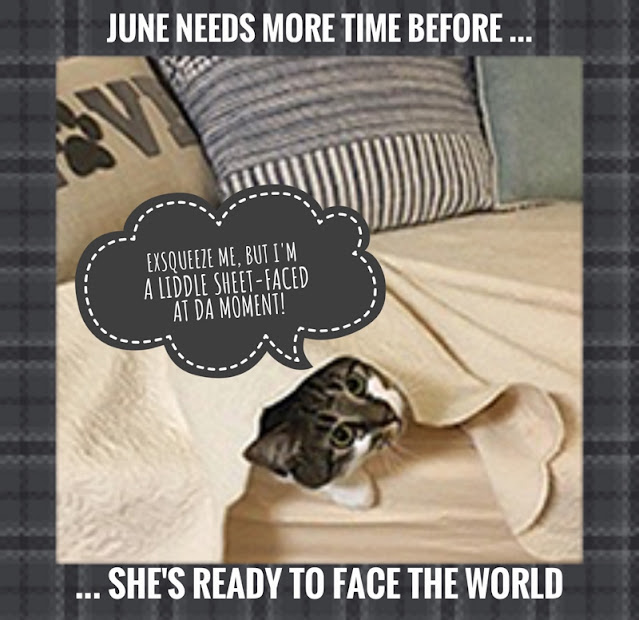 A roll of toilet papurr might come in handy!
WARNING:  SANITIZE BEFORE SQUEEZING

MEAT EEYORE NEEDS BREAK FAST
"Oh Pooh! I bin bye-passed again" says he.
You need to make a meteoric leap for felinekind
and claim your sawsage.  If you saw it furst, it's yours! 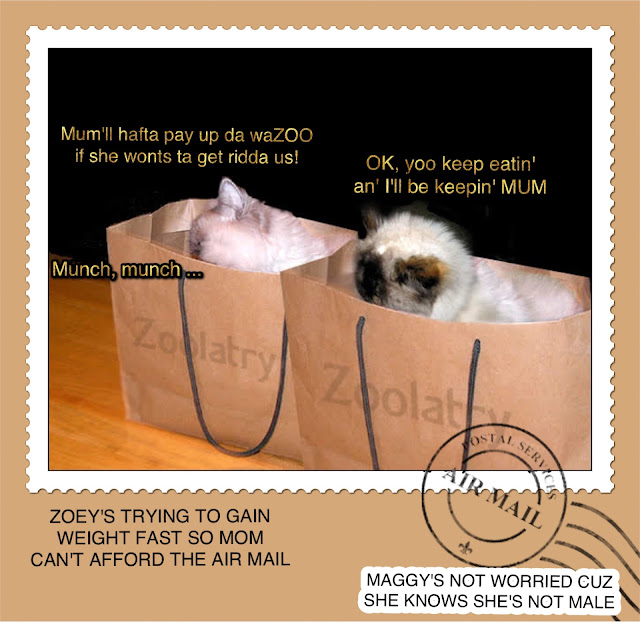 Now that Zoey and Maggy are angels, they know it was silly to worry about things like that.  They just want to Mummify Mummy so she can come over to their place.
(Shades of Psycho!)

DANTE MAKES A DEPAW-SIT TO THE SNOW BANK
HE'S NOTHING IF NOT THRIFTY
WHO KNOWS, MAYBE TURDS WILL BE THE NEXT BIT-COIN! 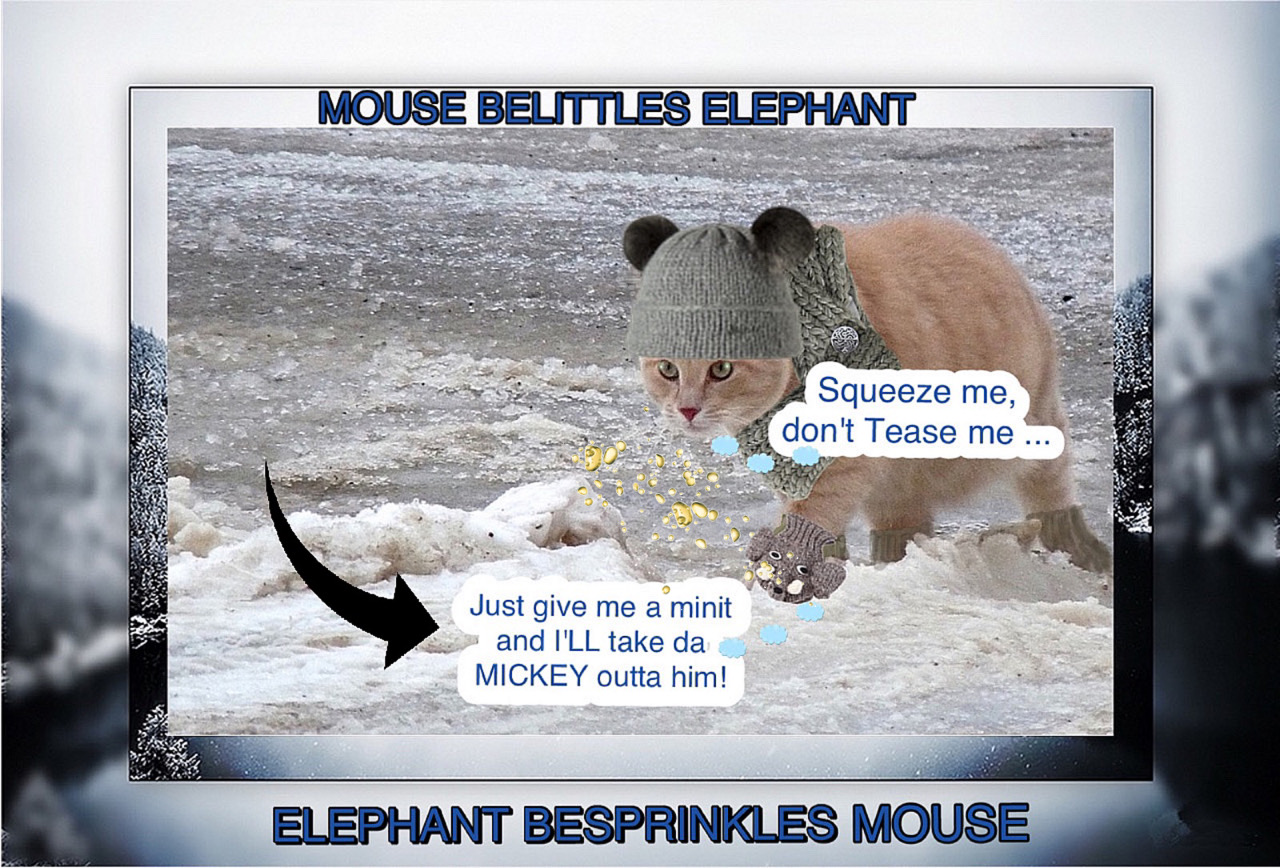 Pee Ess:  How ironic that Mouse put the Squeeze on Elephant, and now Mouse is the one having a golden shower.  YELLO! 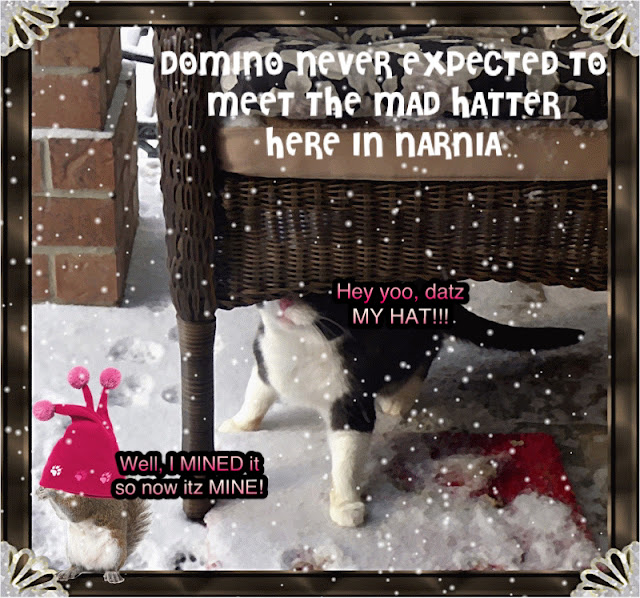 Domino says "I gess I gotta go into MINING -- fur da helmit if nuffin else." 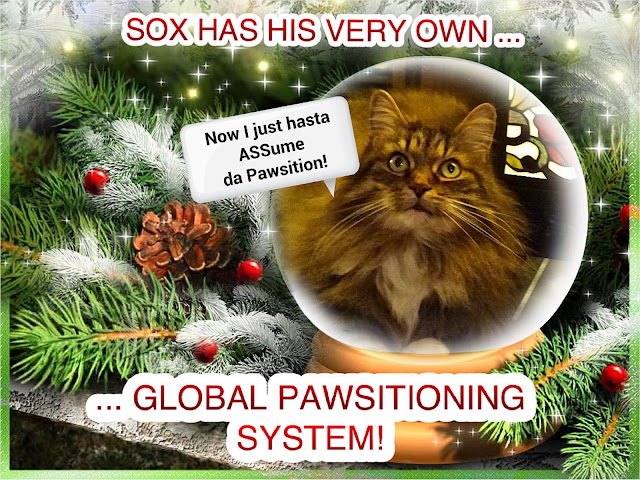 Dare I repeat it?  You know what they say about assuming something, but then you've
already shown what a real asset you are.

And now, just as I thought -- you can hardly 'contain' yourself.
I'd say your Global PAWSitioning System is
OFF COURSE ...
... Of Course!
We are thankful for all of today's PURRticipants no matter where they HAIL from
(as long as they go back).
Posted by CCL Wendy at 1:00 AM 5 comments: 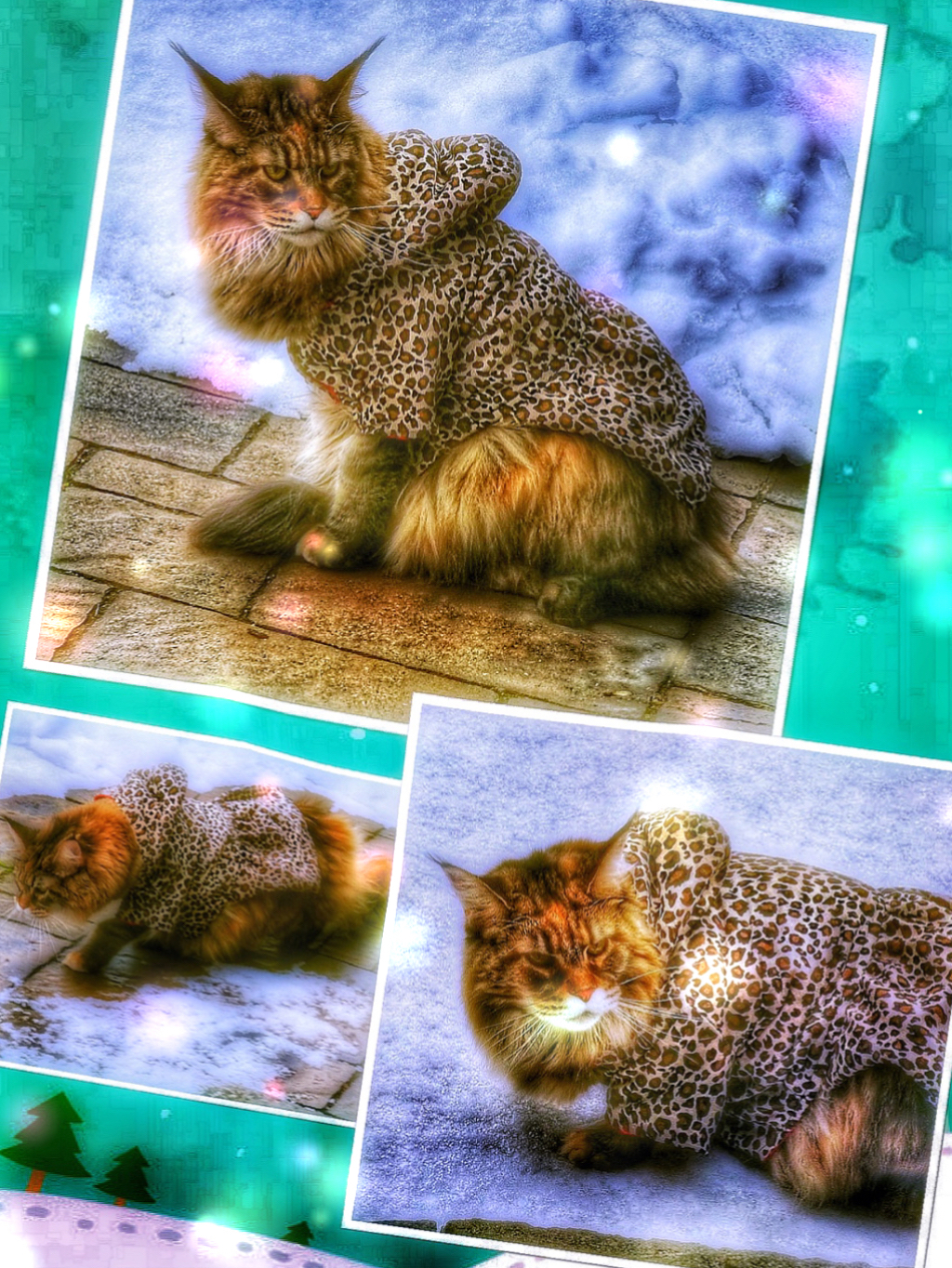